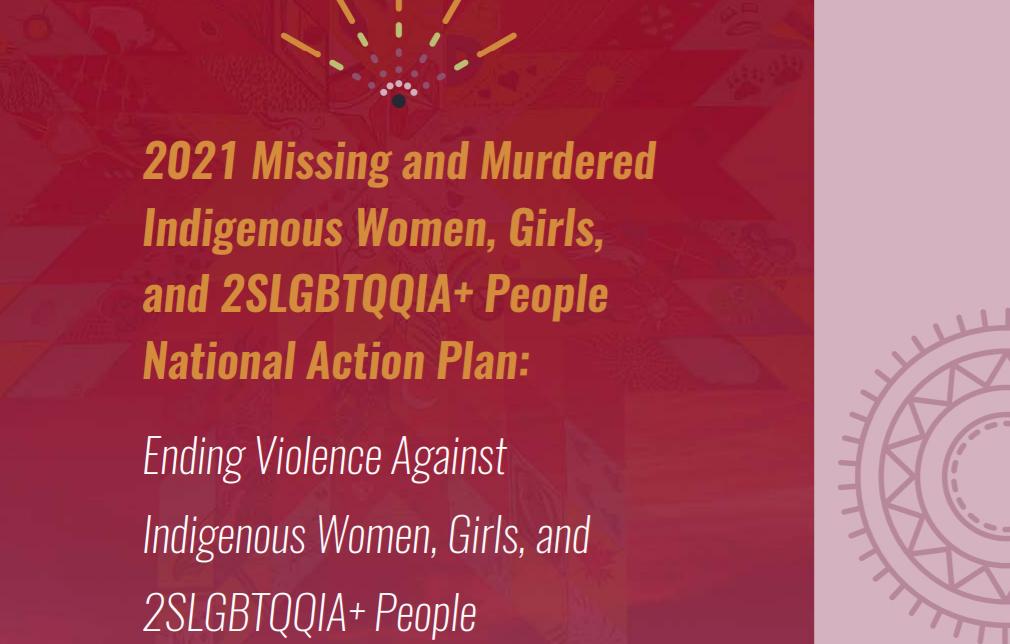 Indigenous women and girls are 12 times more likely to be murdered or missing than non-Indigenous women, ultimately amounting to genocide, reports Canada’s National Action Plan. The report is titled “Ending Violence Against Indigenous Women, Girls, and 2SLGBTQQIA+ People,” and it follows the 2019 National Inquiry into Missing and Murdered Indigenous Women and Girls. The National Inquiry report is the result of evidence gathered from public hearings, guided dialogues, and testimonies about the violence against Indigenous women, girls, queer people, and gender-diverse people. It provides 231 recommendations for ending this violence.

Released in 2021, the National Action Plan is the next step in addressing the National Inquiry’s recommendations. It also includes recommendations made in the Métis Perspectives of Missing and Murdered Indigenous Women, Girls and LGBTQ2S+ People. As an overarching, broad plan, this report details necessary actions for governments and organizations to implement. Another more specific document will later be created with timelines and measurements of progress. The National Plan is recognized as an “evergreen document,” changing and adapting to serve the needs of the future. It acts as a foundation and first step.

The National Action Plan is broken down into multiple short sections. Indigenous stakeholders such as the First Nations, Métis Nation, and Inuit contribute specific plans, focusing on their priorities and necessities. Each Canadian province also provides a plan that is particular to their provincial government. Many provinces organize their information under two separate headings: “Current Progress” and “Priorities and Next Steps.” Most specific plans are three to four pages long in total— only main themes are reported in the National Action Plan, with the majority of stakeholders including links to their full plan. These links provide more information about programs and will be accessible further below.

The National Action Plan stresses the importance of centering families and survivors. Over 100 Indigenous women, 2SLGBTQQIA+ people, and others contributed to the development of the plan. Organizations such as the Core Working Group, National Family and Survivors Circle, and provincial/territorial representatives were influential throughout the process. They made decisions to incorporate recommendations and reviewed the report before publication. The National Action Plan states that it is necessary to honor the strength of Indigenous women, girls, and 2SLGBTQQIA+ people and “support them in reclaiming their sacred roles and responsibilities.” Other recurring themes include addressing the broader causes of violence such as racism and inequality, creating mechanisms to hold governments accountable for protecting their citizens, and ensuring that positive changes are felt by Indigenous women, girls, and 2SLGBTQQIA+ people.

Each specific plan created by Indigenous leaders, organizations, and provinces, will be described briefly here, highlighting their main points and providing links to their full plans. These localized plans identify the priorities of each group and allow for a better understanding of concrete actions currently taking place. While the goal of ending the violence against Indigenous women, girls, and 2SLGBTQQIA+ people remains the same throughout the National Action Plan, ideas for best practices may differ.

The National Family and Survivor’s Circle— composed of Indigenous women from diverse backgrounds— provides guidance on how to engage families, survivors, and 2SLGBTQQIA+ people in the development and implementation of the National Action Plan. They most notably call for an independent oversight body to hold the Canadian government accountable. This body would legally require governments to submit reports about their National Action Plan progress. When rights have been violated, this body allows for abuses to be investigated.

The Assembly of First Nations is the national representative body of 634 First Nations and First Nations citizens across Canada, regardless of where they live. They request the creation of toolkits providing immediate steps to take when experiencing violence, or when a loved one goes missing or is murdered. Further, governments and police must take complaints about missing people seriously and properly investigate cases. Officials will keep the family informed throughout the process. To address root causes of violence and inequality, the First Nations Action Plan focuses on creating shelters, transitional housing, and safe modes of transportation.

The Inuit Action Plan summarizes the need for Inuit representatives to lead initiatives that historically have been led by governments. The Métis Nation calls for the creation of Métis Healing and Wellness centers that prioritize physical and mental health, trauma healing, and cultural knowledge. Métis-focused Gladue Reports are also necessary. Gladue principles are a way for the judge to consider the unique circumstances and experiences of Indigenous Peoples when making a decision of court. This includes intergenerational challenges of colonization such as racism, removal from land, and Indian residential schools.

The 2SLGBTQQIA+ sub-working group action plan requests federal legislation that includes the United Nations Declaration on the Rights of Indigenous Peoples. This would allow Indigenous self-determination and the right to take part in policy decision-making. They also call for expanding LGBTQQIA+ programs and infrastructure by creating safe and supportive facilities. Because Indigenous Peoples living in urban areas often are ignored and undermined, the Urban plan dedicates itself to ensuring that urban Indigenous communities have direct access to research, planning, development, and delivery of urban programs and services. The Congress of Aboriginal Peoples demands that Indigenous Peoples receive funding and services regardless of Status or residency, as nearly 80 percent of Indigenous people live off-reserve in Canada today.

Highlights from the Federal Government Action Plan and each provincial government are included below, with separate links at the bottom of this page for easy reference. Most notably, the government of Canada proposed to invest $2.2 billion over five years and $160.9 million ongoing to respond to this national tragedy. Over the next five years, $18 billion will be used to improve the quality of life and create new opportunities for people living in Indigenous communities. The government’s next steps include drafting an Implementation Plan by July 2021 to provide details and timelines.

Themes from the provincial government plans are Indigenous-led programs, centering families and survivors in the National Action Plan, and addressing root causes of violence. Many provinces, including Prince Edward Island and Newfoundland and Labrador, have already established or are planning to establish cultural training for all frontline service employees. This aims to increase cultural understanding, and shift the system to better include Indigenous knowledge and experiences. Provinces such as Yukon, Nunavut, Saskatchewan, and Ontario, provide culturally appropriate services for child welfare, healing and wellness programs, and correctional centers. The Traditional Pathways Program in Saskatchewan, as an example, provides access to traditional medicines and services to First Nations and Métis patients.

Current progress and next steps prioritize funding Indigenous-led and community-based organizations. Most focus on violence prevention and healing. Other campaigns support public awareness and education, creating legislature to protect victims of domestic abuse, developing a human trafficking task force, and funding housing for Indigenous women, girls, and 2SLGBTQQIA+ people. The National Action plan as a whole calls for Indigenous methodologies of data collection to be used in response to the history of Indigenous Peoples being researched, identified, and misidentified without their Free, Prior, and Informed Consent. Progress will be measured by annual reports, posted by governments to a public-access web portal, and by the outcomes for Indigenous communities.

Specific Action Plans for Federal Government and Provinces (when provided):