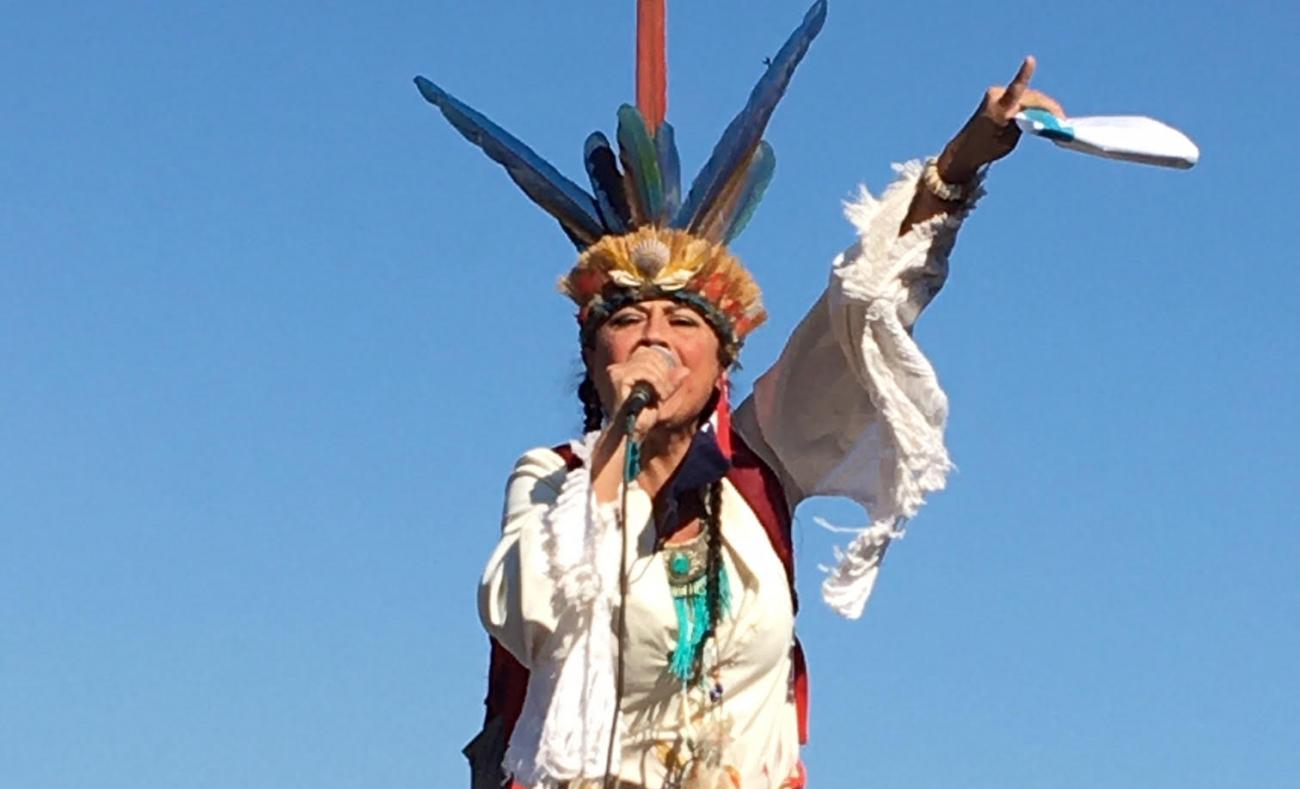 On Saturday, October 12th, Chali'Naru Dones of the United Confederation of Taino People, stands atop the plinth where the decapitated statue of Christopher Columbus once stood, on the Boston waterfront. The crowd responded, "City by city, town by town, Christopher Columbus must come down!" photo: Claire Gosselin / Mass Peace Action.

On Saturday, October 10, 2020, approximately 400 people marched from the Boston Common to the North End Park where a statue of Christopher Columbus once stood.

Beheaded in June amid a nationwide uproar over structural racism following the brutal murder of George Floyd at the hands of the Minneapolis Police, the statue of Columbus is reportedly now under repair in preparation for reinstallation at a North End housing complex for senior citizens owned by the Knights of Columbus.

The march began with traditional prayers from Moonanum James, of the Aquinnah Wampanoag, on Boston Common, where some 50 Native prisoners were shot by firing squad or hanged from an oak tree in 1676 in retribution for the regional defense of Native homelands that came to be known as King Phillips War.

The Boston Research Center of Northeastern University notes, “Many of those executed,” on Boston Common, “had been promised clemency by the English. After surrendering in Rhode Island in 1676, Potuck, a Narragansett sachem, had been promised safe passage by the English colonists. Instead, he was brought to Boston Common and shot. Indian John Monoco and two Nipmuc sachems, Muttawmp and Sagamore Sam, were also assured pardons, transported to Boston, then executed without trial. Those not executed were sold into slavery in the Caribbean.”

In the blazing heat of a fall Saturday, speakers told the crowd of Christopher Columbus’s role in relation to the Taino people of the Caribbean Islands.

Citing Columbus’s own journal, one speaker after another recounted his “discovery” of an archipelago already inhabited by a gracious, welcoming people. Columbus wrote they would make good slaves. He said he could conquer the islands and subjugate all their Native inhabitants with 50 men. On his first voyage, Columbus took six Taino captive, and returned to Spain. Less than a year later, on his next visit, he kidnapped 1500 more Taino. Hundreds died as captives. Hundreds more were shipped to Europe as slaves. Columbus ordered that the hands of Taino men be cut off if they failed to bring him enough gold.

“We want the Commonwealth of Massachusetts to honor Indigenous Peoples Day on the second Monday in October and get rid of Columbus Day once and for all,” declared Mahtowin Munro, of the United American Indians of New England.  She followed with demands that the state legislature take immediate action to pass the bill (S.2848) to change the white supremacist flag and seal of Massachusetts, and the bill (H.443) to ban the use of Native mascots in public schools in the Commonwealth.

The bill to change Columbus Day to Indigenous Peoples Day in Massachusetts did not make it out of legislative committee this session.

Heather Leavelle, of Bedford, co-founder of Italian-Americans for Indigenous Peoples Day, told the crowd, “It’s time for Italian-Americans today to recognize the harm this man has done and take Columbus down from all the pedestals on which we placed him.”

The march stopped at the old State House, where libations were poured to the spirit of departed ancestors including Crispus Attucks, a man of mixed Wampanoag and African ancestry who died there in the Boston Massacre. The next stop was Faneuil Hall, where Kevin Peterson of the New Democracy Coalition once again demanded that Mayor Marty Walsh and the Boston City Council remove slave trader Peter Faneuil’s name from that prominent Boston landmark.

“For three years, the Boston City Council has prevented us from even holding a hearing,” about the slave trading origins of that Freedom Trail edifice, Peterson said.

Peterson, along with scores of Native leaders from tribal Nations dressed in their traditional regalia, led the march next through the hushed confines of Quincy Market, where tourists in the food court listened, many with eyes downcast, others quietly applauding, as the marchers passed by in their hundreds singing “We Shall Overcome.”

At the waterfront, Chali’Naru Dones of the United Confederation of Taino People, wearing a brilliantly hued headdress of macaw feathers and blowing on a conch shell, addressed the crowd from atop the plinth of the decapitated statue of Columbus.

As her children were lifted up to stand beside her, she called for solidarity in the struggle to remove the legacy of white supremacy from the land and honor Indigenous People everywhere. “City by city, town by town, Christopher Columbus must come down.”

Of the five bills backed by the MAIndigenousAgenda this legislative session, S.2848, the bill to change the Massachusetts flag and seal, with its racist image of a white hand holding a Colonial sword over the head of a Native person, is the closest to passage.

On July 28, 2020, the Massachusetts Senate voted unanimously in favor of S.2848 and sent it to the House Ways and Means Committee. Today, we are reaching out to House legislators in their home districts, one by one, building support for its passage.

Advocates for H.443, the bill to ban the use of Native mascots in public schools are also working hard to build more support in both houses of the legislature.

If you can help by reaching out to your state representatives, and urging them to get these bills to the floor for a final vote, please contact: daviddetmold@gmail.com for more details.