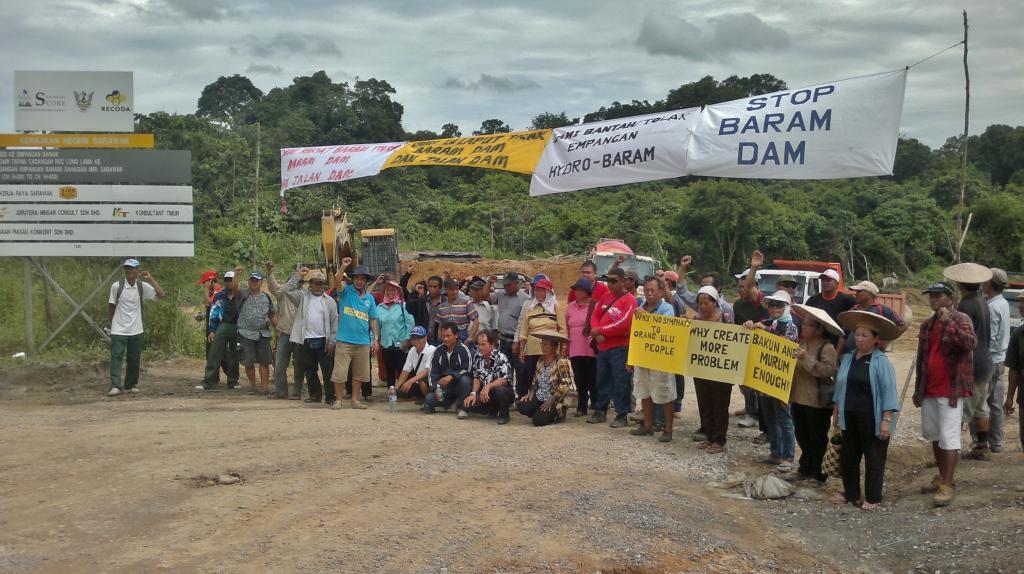 "If the dam is to be built, our homeland, our longhouses, our burial ground, our places of interest, all will be under the water. This will definitely put an end to our livelihood, our cultures. We want the government to respect our boundaries, to respect our rights upon our land." --James Usang, Tanjung Tepalit community leader, Baram, Sarawak

Sarawak, Malaysia, is located on the island of Borneo, the third largest island in the world. Sarawak is home to forty indigenous groups, thousands of endemic species, and one of the largest transboundary rainforests remaining in the world. The state is also suffering from one of the world's highest rates of deforestation; only five percent of its primary forests remain. Now, Sarawak’s forests and peoples face another threat: the damming of its rivers for hydroelectric power.

The Malaysian government and its state-owned energy utility Sarawak Energy Berhad (SEB) plan to build twelve large dams, due to produce 7,000 MW (megawatts) of electricity. Six of them are scheduled for completed by 2020. These dams are part of a development initiative known as SCORE (Sarawak Corridor of Renewable Energy), created to “stimulate global and domestic investment in traditionally rural areas.” SCORE’s long-term energy generation strategy includes harnessing a potential 20,000 MW of hydroelectric power.

According to an analysis by International Rivers, the proposed mega-dams will flood over 2,000 square kilometers of tropical rainforest. The 1,200 MW Baram dam, the next dam slated for construction in Sarawak, will flood an area of 412 square kilometers.

The projected 12 dams will produce 7,000 MW of electricity in Sarawak, although local energy demand is now just 972 MW and is only projected to reach 1,500 megawatts by 2020. Much of this energy will be generated in an attempt to attract energy-intensive investments from industries such as aluminum smelters.

To create these dams, tens of thousands of indigenous people from twenty different ethnic groups will be removed from their traditional lands and homes. Built by the Chinese company SinoHydro, the Bakun dam flooded 696 square kilometers of old forest ecosystems and displaced 10,000 indigenous people, mainly from the Kenyah and Kayan tribes, drowning their villages, farms and the forests in which they would hunt and gather foods, medicines and other goods. Ubong Emang, an indigenous Bakun community leader of Long Liam, said of the dam, "Bakun Dam has caused us so much misery. Our lives have been ruined. We cannot plant crops because all our land is under water." Those displaced were forced to pay nearly US$15,000 for government-built homes, throwing families into debt. Over a decade later, many families live in extreme poverty.

Although indigenous community members have voiced oppositionto the 1,200 MW Baram dam on multiple occasions, government officials posit that the people of Baram will benefit from its construction – although an estimated 20,000 people will be forced from their homes. In previous schemes, those relocated have not been provided the compensation and amenities they were promised.  Families relocated during the Bakun dam construction were promised ten acres of farmland each, but received a fraction of this.

Communities displaced by finished dams experience severe poverty and health problems caused by poor diet and water pollution. Despite being relocated to provide energy for the state, resettled families pay unsubsidized water and electricity bills in their government homes. Bakun dam refugees are now unable to hunt and gather in the forest, but are forced to make due with small plots of land.

Mark Bujang, the head of Sarawak NGO Borneo Resources Institute, commented, “What the government is doing when they’re flooding all these areas is actually killing off the culture, the traditions of the community. It’s basically ethnocide.”

The planned Baram dam will displace 20,000 indigenous people from the Kayan, Kenyah, and Penan ethnic groups. These communities face forced relocation to land where they cannot cultivate, plant, harvest, gather, hunt, or fish as they once did. As a result, many families will have to migrate to towns and plantations for work.

In the past thirty years, many of Sarawak’s forest-dependent people have had their traditional lands taken and sold, often without their knowledge. This is possible because the Sarawak government does not fully recognize indigenous peoples’ Native Customary Rights (NCR) claims to their land.

Not only are claims ignored, but the health of indigenous communities is an afterthought. For example, the SEB did not begin the 944 MW Murum dam project’s social and environmental impact assessment until the construction was already underway.

Without proper representation in Sarawak's government, tribal leaders have resorted to protest. Threatened indigenous communities erected blockades in an attempt to prevent the Murum and Baram dams from reaching completion. Participants in these blockades have been isolated, intimidated, threatened, and arrested. And even though the Bakun dam is still unable to sell all its electricity, construction of the Murum dam was completed in 2013 by China Three Gorges Corporation and Sinohydro, and its reservoir is being filled.

In response to Telang Usan assemblyman Dennis Ngau’s statement that those displaced will be happy with the project, sixty-five leaders representing various indigenous communities in Sarawak collectively stated,

“We the people of Baram…would like to reiterate urging to the government and the Sarawak Energy Berhad (SEB) to stop and revoke its plan to build the Baram Dam. We also demand that all activities that are carried out in connection with the proposed Baram Dam be ceased forthwith as we regard the proposed dam as a real threat to our rights, lives, livelihood, lands, resources, properties, heritage, and future and urge all parties to respect our rights and choice to remain in our respective existing villages and settlements."

While mega-dams are often touted as green energy, they actually contribute to climate change. The foul stench of sulfur emitted by the Bakun dam reservoir in Sarawak can be smelled kilometers away, and local people report that the water now causes diarrhea.

Zach Hurwitz of International Rivers stated in an interview, “The carbon budget of these massive reservoirs is likely to produce as much CO2 equivalent in methane as a typical fossil fuel power plant over a ten year span.”

Peter Kallang of SAVE Rivers said, "You cannot say this is a Sarawak problem – this is our national problem. If you look at the impact of a dam on the environment, this is an international problem, because it will drown one of the most biodiverse parts of the world.”

The massive dams that will submerge Sarawak’s forests present one of the greatest environmental and social threats the island of Borneo has ever faced. SCORE’s dams will critically compromise the existence of thousands of discovered and undiscovered plant and animal species. Two thousand square kilometers of vital rainforest and the homes of tens of thousands of indigenous people will be flooded, all for an unsustainable, unprofitable, and unnecessary energy source.

As Mark Bujang said, "We have seen the widespread destruction of the forests in Sarawak, but once you build a dam there, there's nothing left. It's the final nail in the coffin."

--Amanda Stephenson is a writer, researcher, and filmmaker living in Oakland, CA. She is working with the Borneo Project on an educational film series documenting the environmental and social catastrophe that would follow the construction of Malaysia’s proposed mega-dams. If no action is taken, thousands of people will be forcefully relocated and countless species will be threatened.

The Borneo Project Film Team is currently accepting donations to support the completion of this series.  Learn more about this project and watch a trailer for the films here.

This article first appeared in full in The Ecologist: http://www.theecologist.org/News/news_analysis/2456534/borneo_megadams_…