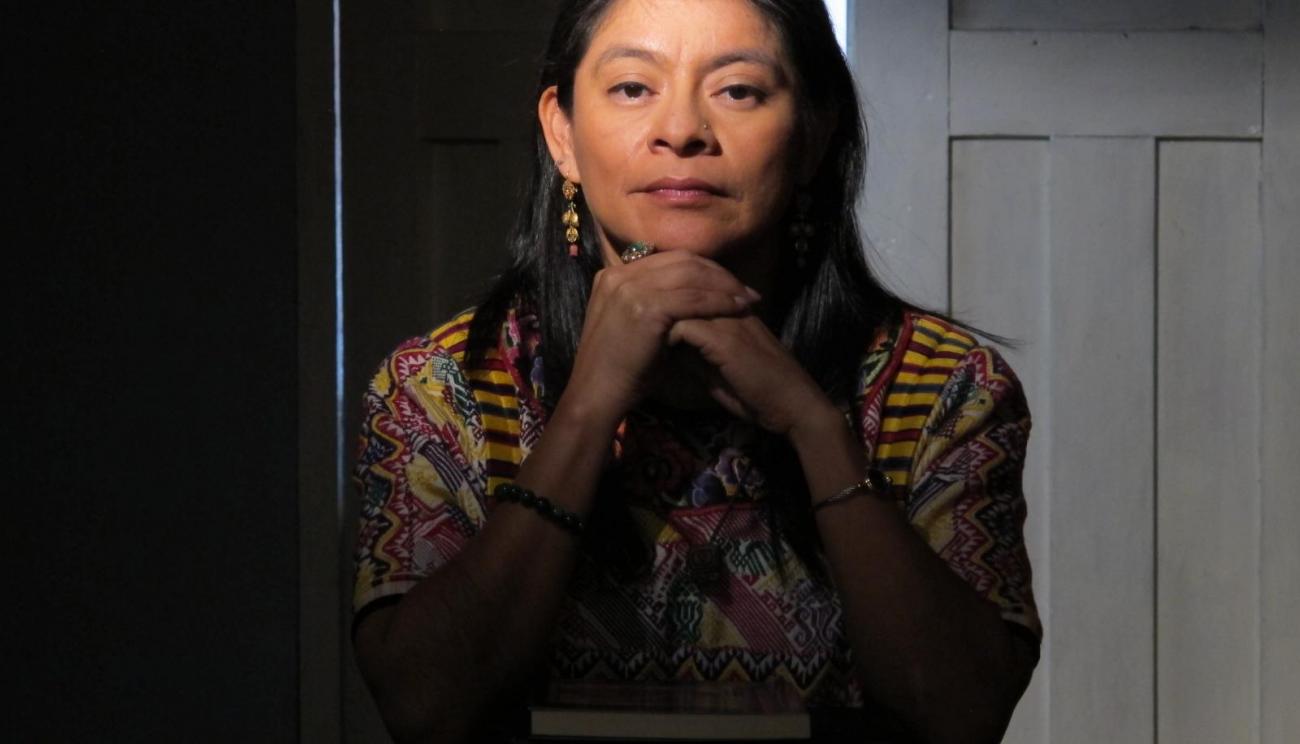 On January 24, 2018, at the premier of the new film 500 Years (2018) by the American director Pamela Yates, Cultural Survival interviewed Dr. Irma Alicia Velásquez Nimatuj, one of the film's main protagonists. Dr. Irma Alicia Velásquez Nimatuj was executive director of the Mecanismo de Apoyo a Pueblos Indígenas Oxlajuj Tzikin (Support Mechanism for Indigenous Peoples) in 2005-2013, is the first Maya-K'iche' woman to earn a doctorate in Social Anthropology and launched a court case that made racial discrimination illegal in Guatemala. As a recipient of numerous academic fellowships and awards for her journalism, she was a member of the Latin American Consulting Group of Indigenous Leaders for UNICEF and actively participates in the UN through the Permanent Forum on Indigenous Issues. She also served as advisor on Indigenous issues for the Latin American and Caribbean office of UN Women in 2014-2015. From a historic genocide trial to the overthrow of a President, 500 Years tells a sweeping story of mounting resistance played out in Guatemala's recent history through the actions and perspectives of the majority indigenous Mayan population, who now stand poised to reimagine their society. The film premiered in Quetzaltenango, Guatemala at the Roma Theater.

Cultural Survival: Can you tell us about you. Who is Irma Alicia Velásquez Nimatuj?

Irma Nimatuj: I am a social anthropologist and a journalist. Part of my work is to accompany Indigenous, urban, and rural communities in claiming their individual and collective rights, both inside and outside of Guatemala. I am a K'iche' woman from Quetzaltenango and although for my work I don’t spend as much time here [Quetzaltenango] as I would like, I am proud to be from this place.

CS: How did you become involved in this film and how has been the experience so far?

Irma Nimatuj: We had already filmed a documentary with the director Ana Carlos, which was an important experience because it gave us the opportunity to travel through Guatemala and work on the situation of Indigenous women in the country. Working with Ana Carlos, allowed me to approach cinema at different times, and working with Pamela Yates has been a gift, because she is a director, a producer, and a creator who knows Guatemala's history quite well, so when we started working together I felt that it an amazing opportunity to contribute my knowledge. We have been working with Pamela since 2013 and we finished the film in 2016. It took almost 4 years of filming. Four full weeks were filmed in Quetzaltenango, but we also filmed in San Marcos, Huehuetenango and Guatemala City. Filming was also done in other parts of Guatemala. Working with Pamela was a social commitment, it taught me to see cinema as something beyond commercial cinema that creates imaginary characters and sensations that do not change reality. Documentary film shows that it is really possible to empower, strengthen, motivate and teach about history as well. Students no longer read or go to libraries but film is a viable mean to educate and document what is happening.

CS: This film was extremely anticipated and is part of a saga of two other films previously produced by Pamela Yates. How did the whole process start?

Irma Nimatuj: Pamela is lucky, she came to Guatemala at a very young age to make the film When the Mountains Tremble in 1982. This film is a classic at foreign universities. History or Social Sciences teachers use it when they speak or teach about Central America and this film contains scenes that are key in a process that would come 30 or 35 later. For example, the interview with General José Efraín Ríos Montt. In this interview, he is accepting that there was a chain of command in the army, which his defense during his trial argued that it did not exist. One can see in it the value of documentary film. What is filmed at this moment is living history. What we filmed in 500 Years is history, although at this moment it is alive. Making documentary film is a challenge. The film is divided into three parts, and in them there is a common thread that finally shows Guatemalans that it is possible to change their situation when people become actors of their present and their future.

CS: How do the three films of this trilogy complemented each other? Do you consider 500 Years different film from other films that address the struggle and resistance of the Mayan people in Guatemala?

Irma Nimatuj: I think that each documentary work is complemented because history has multiple points of view, some are general and others are very specific. When the Mountains Tremble is  Pamela’s first film and when she came to the country for the first time she realized genocide and armed conflict was occurring. Then comes Granito, where it shows how the survivors of genocide and armed conflict seeking justice inside and outside of Guatemala. Finally, comes the third film, 500 Years, which addresses the trial against Ríos Montt and the massive protest of 2015 against corruption, where youth are shown with all their strength and energy, overflowing in the streets saying they wanted a different country. These films demonstrate all this historical richness, becoming fundamental in the study the history of Guatemalan history, but they are not the only films. There are other films that have been documenting what has happened in the country and that are from other documentary filmmakers of the same level and category as Pamela. Unfortunately, there are not many documentary films from our country, but there are people who help to portray a very critical and analytical vision of what Guatemala is.

CS: This film has been presented at important film festivals around the world, such as the Sundance Festival and more recently at the Nantucket Festival. How has the public acceptance been abroad?

Irma Nimatuj: At Sundance, 500 Years was presented in February 2017, and it was very important because Sundance is Hollywood’s opposing party. There is no red carpet, there is no glamor but a lot of conscious work, a very strong collaboration between producers and directors. Robert Redford, who started the festival has done a great job, and now a significant group of Native Americans are working hard on documentary film, as well as many directors and producers from different parts of the world. Getting to Sundance is a huge opportunity because it is a chance to showcase what is being done worldwide in the field of documentary film. Everyone meets there not to compete, but to learn, and share about the work men and women are doing to create change. The public of these festivals, is a very critical and analytical public that does not go there to watch movies where people transform into monsters or super heroes, but comes to watch women and men of flesh and blood who are fighting. The screening rooms at the Sundance Festival were packed during the presentation of 500 Years. In some of the festivals, the entire audience stood up and applauded, inspired, and excited at the end of the film. At each presentation I have found many people from Guatemala, with Guatemalan ancestry, or foreigners who have lived or worked at some point in Guatemala end up crying when they watch the movie.

CS: You said this movie is important for Guatemalans, and we think that it is especially important for Indigenous women. How can you make this film accesible to them?

Irma Nimatuj: In part, for this reason, it was decided to launch the movie in Quetzaltenango, breaking away from the idea that the most important things happen in Guatemala City. We recognize that it is here where women are making a great effort to keep the country up. Choosing Quetzaltenango as a location to release the film is an acknowledgment of the women in the different departments of Guatemala. In addition, the film is on tour in Totonicapán, Quiché, Alta Verapaz, and Chimaltenango. Skylight, the company that has produced the three films works with social bases in New York, Colombia, and other countries, and one of its main goals is to train people on documentary filming. On January 24, a workshop was held here in Quetzaltenango on how to use documentary film to record social memory that is being lived, and then the premiere of the film. Both activities are fundamental to share new knowledge, create new documentary film teams and strengthen the ones that already exist, so that these people can become the new storytellers.

What Pamela Yates has done is key, but it has to come younger people, from our country. It is very good to have allies like Pamela Yates, the director;  Peter Kinoy, the editor; Paco de Onís, the producer, but we also have to have our own teams of filmmakers who are able to understand what is going on critically, and with a wide view, with eyes of imagination, creativity and analysis. In the whole tour will offer multiple workshops, because we not only want to train but learn from the people where the film is being shown.

CS: Would you like to add something more about the film and tell us why we shouldn’t miss it?

Irma Nimatuj: I would say because the film shows the importance of Indigenous men and women’s participation, we break the stereotype that the Indigenous Peoples are the poorest, the perpetual victims. It stops romanticizing Indigenous Peoples, their clothes, their dances, their ceremonies, their spirituality. This film tries to make known that Indigenous women and men are more than that, that they are protagonists of their own history and they have been for 500 years. It presents men and women with agency, not men and women who are taken and who obey as sheep to do what people tell them. It presents women and men with a strong voice, with knowledge of their history, their origin and with clarity of the reality in the country. It also shows the youth, the future of the country, as the protagonists of the country, demonstrating this with the protests of 2015. The film is also important for addressing the issue of justice. The film leaves viewers with the feeling that we have to keep fighting and suggests perhaps we should seek other actors and other voices to realize what is possible, and to reimagine a different country and make it a reality.