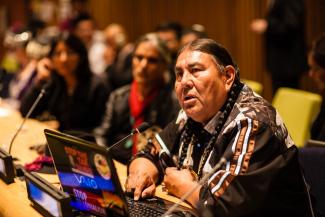 Tom Goldtooth (Diné and Dakota), the executive director of the Indigenous Environmental Network (IEN), was recently presented with the prestigious Gandhi Peace Award. Named in honor of Mahatma Gandhi, since 1960 this annual award by the US-based NGO Promoting Enduring Peace is granted to individuals for “contributions made in the promotion of international peace and goodwill.” Under Goldtooth’s leadership, IEN, formed by grassroots Indigenous Peoples to address environmental and economic justice issues, has become one of most visible Indigenous Peoples’ organizations, at the forefront of issues such as the Tar Sands and the Keystone XL Pipeline. Fundamental to their success is a combination of strong ties to the communities they partner with, while being grounded by elders and uplifted by the dynamics of their engaged youth leaders.

Miriam Anne Frank: How did you get into this line of work and what has your personal journey been?

Tom Goldtooth: Being an activist really means having confidence to speak out. The concept of confidence is very critical to us as American Indians, Alaskan Natives, and First Nations in Canada because of our history collectively as tribal peoples, we are not taught to be confident. My mother and stepfather always taught me to be confident and to be proud of who I am and to speak out. My mother was an activist in her own right. She worked at the Navajo reservation for a number of years and she was even asked to run the hospital by the Navajo Nation at Sanders. In my younger years I got involved in some activist activities like Peak Mountain and other American Indian Movement actions around the southwest that really helped me get a better sense of these social justice issues. I ended up going to Arizona State University and enrolled in their engineering department with industrial design. Eventually I lost interest in going to school and instead began hanging out with the Indians in the Phoenix area. Ultimately the US government got a hold of me because the Vietnam War was going on. I had been on deferment as I was enrolled in school, however, once you dropped out of college they catch up to you. I then decided to enlist myself and get the kind of training and employment that I wanted. I enrolled in the US Army and signed up to be a financial specialist, basically paying the troops. I worked for Uncle Sam for about three years and ended up in Washington State. I got involved with activists there like Janet McCloud, one of the founders of the Indigenous Women’s Network. They were going through fishing rights issues. There was a lot of racism due to the fact that a lot of non-Native fishermen didn’t want the tribes to have any fishing rights. Fishing rights based on treaty rights became a big issue there, so I got to learn a lot about these conflicts. As military people we were trained in defense, so we had to do some training with the people there with terrorist types of threats. We then also helped to protect the tribe against racist attacks. So it was interesting years of activism. That is the kind of work I enjoy, being with our Native people at the grassroots level. We became familiar with how tribal government’s structures work and sometimes we had to negotiate with them. I gravitated towards grassroots activism and today I’m the director of the Indigenous Environmental Network, the grassroots Indigenous organization of frontline communities speaking for themselves.

TG: One of the biggest successes we have had is with the Indigenous Environmental Network now existing for over 20 years. I am applying that accumulated knowledge that I have received since my youth, being open minded and open hearted to life within our Native community. Understanding the concepts of assimilation, acculturation, decolonization, colonialism, imperialism, militarization, racism, tribalism— all those things have helped me become who I am. My area of development was to look at how environmental protection needs to be applied in our territories. We’ve been able to mobilize a national and international network of Indigenous Peoples coming from the front lines of communities. We were successful in the strategy we used in the prairie lands and that we used in the United States when we shut down the Trans-Canada Keystone XL pipeline proposal. Here in Paris at COP 21 we have been successful in lifting up the voices of Indigenous Peoples using the tools of direct actions and media. It’s part of developing our global movement of “system change, not climate change.” We have come here to work with civil society and the French coalition. We are trying to have them better embrace our understanding for solutions rather than just accept technological or carbon-based solutions. Some of the failures weren’t directly related to our abilities. One issue is that there has never been [enough] funding for our work. Environmental justice back home is very different than philanthropy and social services. Tobacco or health programs seem to be able to get funding, but not our environmental programs. We at IEN are taking on some of the largest corporations in this world. And the system, or the metrics as I call it, constantly force us to compromise and negotiate terms with the polluters. One of the main principles designed on the early years of IEN, in the early ‘90s, is that we don’t make deals with the polluters.

What is your assessment of COP 21 and the next steps?

TG: For the COP, I have started to see a trend after the Kyoto Protocol of what I coined as ‘corporate takeover.’ I have come to accept that we have to look at some of the root causes of climate change within Indigenous territories and that is capitalism. One of the solutions coming out of the discussion on mitigation falls on what I call ‘climate capitalism,’ which are market-based solutions. It allows the polluters to pollute rather than to address the problem at its source. They can offset carbon by investing in conservation of trees in the global south where carbon credits are cheaper. They are now using the market system so that the people investing in the land are actually the polluting companies, the mining corporations, and the petroleum industry. A lot of communities don’t know that. So, for COP 21 this is a critical moment. This Paris Agreement probably won’t come out as a legally binding agreement, but voluntary. There is something extremely wrong with that, especially when it has been pushed to industrialized countries, as well as supported by economies in transition.

What is the next step?

TG: We don’t expect a strong agreement, so our strategy is to build up a movement of resistance, a movement of transition, a movement of solutions. A movement that involves implementing the traditional knowledge from back home, bringing back our traditional seeds, building the concept of food sovereignty. If there is to be a form of energy development within our territories, we have to make sure that there are mechanisms for localized energy, for energy development on a small scale in our villages, in our communities and in our reservation. We have the last word—not the world leaders or corporations —to create space for Indigenous Peoples to stand with civil society to build a global movement that is solution-based and built around the concept of transitioning away from the fossil fuel economy.

How do you think we can best motivate people to care about protecting the planet?

TG: The work that we are doing is addressing and developing public education that helps the non-Indigenous world learn about the sacredness of Mother Earth. As Indigenous Peoples we have an understanding about our responsibilities and our role. We understand how we are here as the guardians and caretakers of the soil, land, nature, and life itself. So we want the world to have a better understating on how to address climate change and some of the ecological challenges that this planet is now having. We also challenge the legal paradigm based upon property rights and are moving to a new paradigm that recognizes the earth to the fullest, that respects the integrity and voice of Mother Earth. Our hope for the future is tied to the prophecies as Indigenous Peoples. Where I live, the Great Lakes, some of the neighboring tribes believe in the 8th generation, the 7th generation, the 6th fire, the 7th fire. I remain hopeful that the guiding light of the sacred ways have been given to our people and should be extended to the non-Indigenous people so they will also have a better connection to the earth. My prayers are that they will accept their responsibilities, to recognize and also defend Mother Earth. 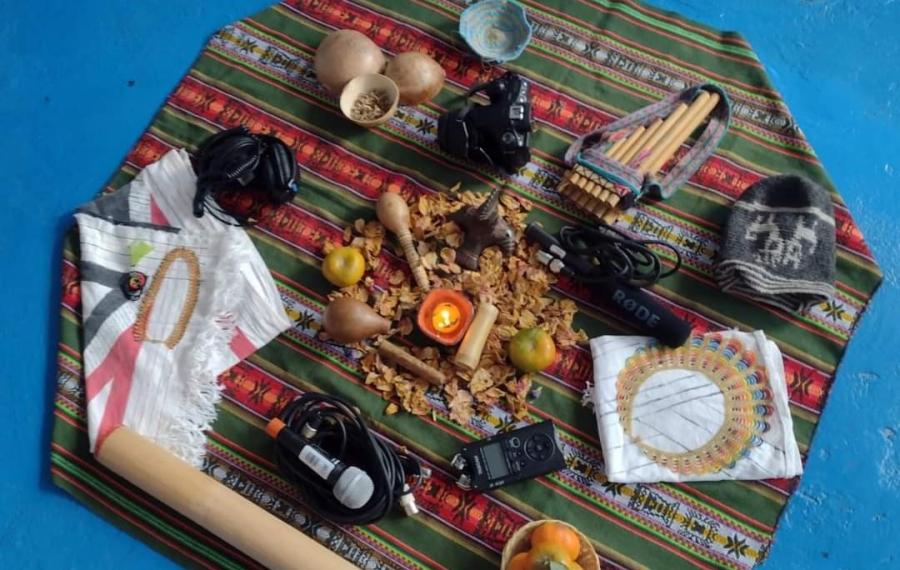 Decolonizing Journalism from an Indigenous Perspective 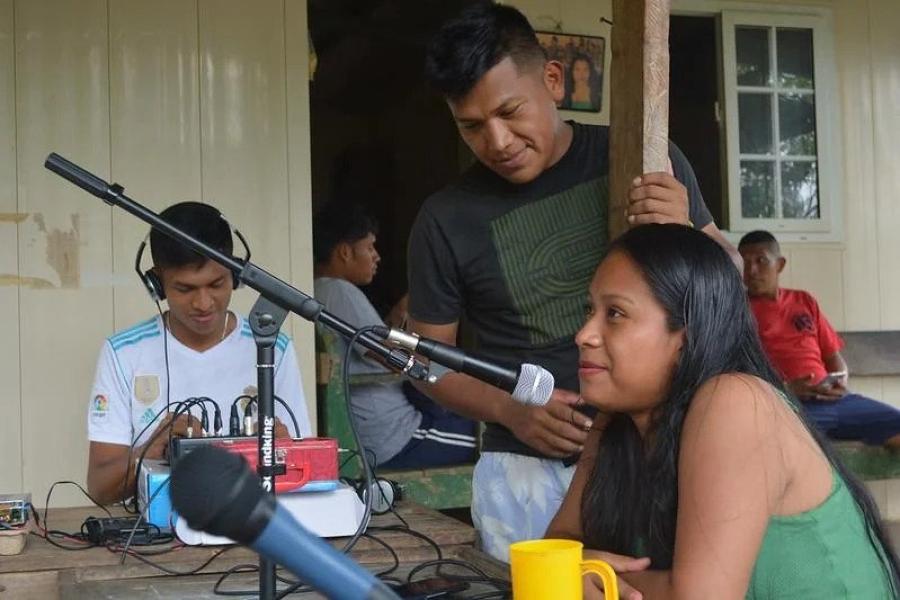