What happened in Toto? 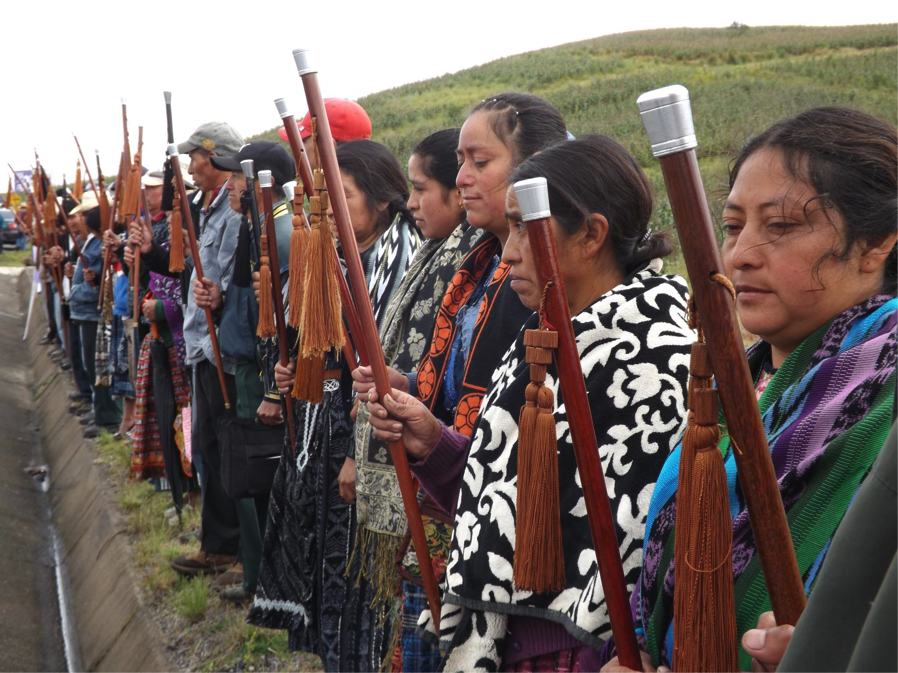 In early October, the military government of Guatemala’s president Otto Perez Molina massacred a peaceful protest held by Indigenous K’iche protestors from Totonicapán, resulting in the death of seven men and leaving thirty-four others injured.   Totonicapán, a department in the western highlands of Guatemala, holds an Indigenous K’iche majority population.  Despite being one of the poorest and most malnourished of the departments in Guatemala, it also has been ranked as one of the most peaceful, ranking third to last for rates of violent crime.

Military and national police arrived to the Cumbre de Alaska, a stretch of the Inter-American highway in the Guatemalan highlands, at 9:30 the morning of October 4th.   There, hundreds of K’iches from the department of Totonicapán had gathered to protest three issues: elevations in the costs of electricity, changes to the education system, and constitutional reforms that would eliminate government recognition of Indigenous ancestral authorities.

Recounts of what happened that morning vary, but what is confirmed is that three vehicles of military and police personnel approached the scene and eventually fired at least 108 bullets into the crowd of protesters and launched 89 canisters of teargas.

Initial reactions from the government claimed the police were unarmed.  “I want to be emphatic,” began Interior Minister Mauricio Lopez Bonillo. “The army and police forces that were present were not carrying firearms. They were carrying non-lethal weapons, tear gas and pepper spray. They follow protocol.” He concluded: “The community members attacked each other.”

A very short time later, after photos emerged of military forces carrying assault rifles, they changed the story. This time, the military were carrying weapons, but only shot them in the air to scare protestors who were throwing rocks and sticks.

Finally, a full investigation of the incident was carried out, concluding that eight soldiers fired weapons directly at protestors, which they did in violation of superior orders. The Attorney General of Guatemala has charged Colonel Juan Chiroy Sal, the commander of the detachment sent to the Cumbre de Alaska that morning, with extrajudicial murder, along with the eight soldiers who fired their weapons.

Commissioner Dinah Shelton, of the Inter-American Commission on Human Rights responded: “The IACHR values the actions taken by the Office of the Attorney General. It is now essential that the judicial inquiry continues until all facts are cleared up, and criminal responsibilities are established. It is also of fundamental importance that the authorities of Guatemala adopt mechanisms to avoid excessive use of force by State agents in protests and demonstrations,” according to their press release.

[[{"type":"media","view_mode":"full","fid":"61386","attributes":{"alt":"","class":"media-image media-image-right","height":"578","style":"width: 300px; height: 217px; float: right;","width":"800"}}]]The use of violence and repression by the military has come to a peak in Otto Perez Molina’s administration. Perez Molina, an ex-military general during Guatemala’s violent armed conflict, campaigned on the promise that he would use a militarized state to combat drug trafficking and violent crime that plagues urban areas.  Instead, during his first year in office, the country has seen increasing use of military repression against Indigenous activists, as was seen in the State of Siege imposed in May in the town of Barillas, Huehuetenango after protests arose over a controversial hydroelectric dam.  “We believe there has been a real return to the use of violence as a response to social demands,” explained Domingo Hernandez, part of the board of directors for the Mayan grassroots group Waqib’ Kej.  He continued, “In Guatemala we urgently need to start a process of democratization.  In this government it hasn’t been possible. A militarized system is vertical, authoritarian, patriarchal, and doesn’t allow for citizens– Indigenous Peoples, women, and youth– to express their opinions. This state, led by ex-military officials, is treating our country as if it were their headquarters.”

The protest was convened by the group 48 Cantones, (48 villages) one of the longest standing, and well-respected system of traditional Indigenous governance existing in Guatemala.  The group is an amalgamation of 48 villages around the department of Totonicapán, and is organized to defend the cultural and territorial heritage of their ancestors. Anthropologists have tied the group to Mayan resistance dating back to the arrival of the Spanish colonizers in the region.  Their system of sustainable forest and water management has been an example for communities all over Guatemala.  In 2010, Cultural Survival's Community Radio Project worked with 48 Cantones to produce a radio-novella series on these sustainable practices for broadcast across community radio stations of Guatemala.  Leaders of the movement have called for a deep and transparent investigation of the massacre,  questioning the resolution of the government that the soldiers and the colonoal acted alone, against orders.  "Hopefully this will lead to trials of those that acted to shoot but also start a process of investigation into the  intellectual leaders,” said Juana del Carmen Tacán, president of the  48 Cantones.  "Someone must have given the order to shoot them; we want to know who they were.  You have to get to the top."

Cultural Survival deplores this act of violence against the members of 48 Cantones and extends our condolences to the community of Totonicapan.  Leaders in Guatemala have called the international community to action: “We ask the international community to be attentive to what is happening in Guatemala. We can’t permit a return to the past, to new massacres. The people of Guatemala want to live in peace and take back our country from the hands of the oligarchy and the military; to recuperate a democracy that has been taken from us over hundreds of years,” said Domingo Hernandez.

The massacre at Totonicapán became the forefront issue at the October 12th March of Resistance in Guatemala City, a national call to action for Indigenous People's to express their most pressing concerns on the anniversary of Columbus' arrival to the Americas.