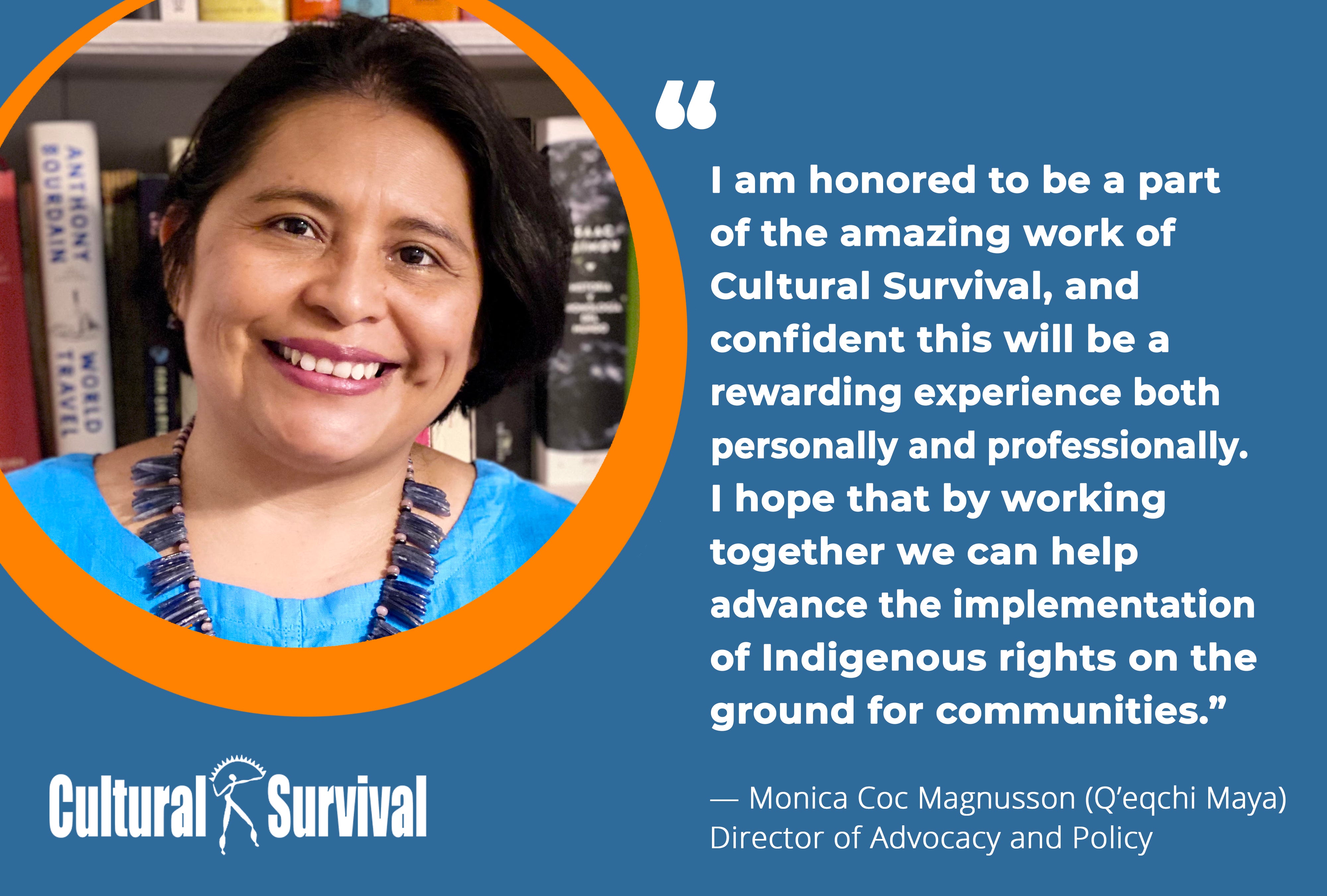 Cultural Survival is honored to announce the expansion of our leadership team and introduce our new Director of Advocacy and Policy, Monica Coc Magnusson (Q’eqchi Maya). Monica is an attorney from Belize, born in Laguna, Toledo District, Belize, where she currently resides.

Monica is the first Indigenous woman from southern Belize to be called to the Belize Bar and to become a lawyer. For the last decade, she has engaged in the struggle to defend Maya land rights. Her involvement began as a law intern and later as a member of the legal defense team for the Maya Peoples in Belize. She served as local counsel to the Maya Leaders Alliance and the Toledo Alcaldes Association where she advanced claims before Belize’s Highest Appellate Court, the Caribbean Court of Justice, as well as the Supreme Court of Belize. Some of her most notable achievements include her involvement in the landmark case of the Maya Leaders Alliance, et al vs. The Attorney General of Belize in which the Caribbean Court of Justice in 2015 affirmed that the Maya communities of southern Belize have rights to the lands that they have customarily used and occupied, and these customary rights constitute property under the provisions of the Belize Constitution that protects property rights. Most recently, Monica was co-counsel to the Maya community of Jalacte in an expropriation claim where the community was awarded 3 million USD in damages for violation of their constitutional rights.

Monica graduated from Toledo Community College in 1997 and went on to attend the prestigious St. John’s College, Junior College (SJC). In 2000, she graduated from SJC with an Associate Degree in General Studies and won a Jesuit scholarship that allowed her to attend Le Moyne College in upstate New York where she graduated with a Bachelor of Arts Degree in Sociology and Anthropology in 2002. In 2005, Monica began her legal training at Indiana University School of Law and received her Doctor of Jurisprudence in 2008. In 2009, Monica was called to the North Carolina State Bar, where she practiced law for several years before completing the requisite program at Norman Manley Law School and received a Certificate of Legal Education which qualifies her to practice law in Belize. Her areas of practice include international human rights law, civil litigation, and criminal defense.

Monica is excited to join the Cultural Survival team and says, “I am honored to be a part of the amazing work of Cultural Survival, and confident this will be a rewarding experience both personally and professionally. I look forward to a long and fruitful relationship with Cultural Survival. I hope that by working together we can help advance the implementation of Indigenous rights on the ground for communities.”

Please join us in welcoming Monica to Cultural Survival!